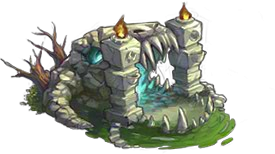 Within the Challenge Hall, one will find opponents so mighty you will require the aid of others to defeat them, and foes ready to duel the elite one-on-one.

There are many battles players can choose to partake in, and each battle features powerful enemies from a different faction and an emphasis on different tactics. There are mainly 2 difficulties, though Casual is also available for Shimmering Cave. Each battle has 2 stages. Up to 4 players can participate.

At the end of a boss fight, the player(s) will receive experience, silver, and reputation. They also get the opportunity to flip cards and receive additional rewards.

There is a slight chance that the second stage of a battle will promote the boss to "Awakened", equipping them with Godlike and Awakened cards. There is only one chance to beat the boss. If unsuccessful, the boss will revert to its normal status and flip rewards. If successful, the end reward selections will all become the same items:

on Windy Cliff, Desert Fortress and Castle of Bones
2x

VIP Battles are one player only battles against very powerful enemies with Godlike and Awakened rank cards. Each race has it own boss. These battles are only open to those with at least VIP Level 1 and only 2 successful attempts can be attempted per day (unless during an event).

At the end of a boss fight, players will receive experience, silver, and reputation. They also get the opportunity to flip cards and receive additional rewards, such as Soul Shards, Awakened Fragments and a special saddle.

Retrieved from "https://rise-of-mythos.fandom.com/wiki/Challenge_Hall?oldid=29759"
Community content is available under CC-BY-SA unless otherwise noted.