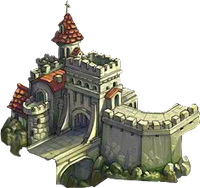 City defense is a great source of Silver. You are offered defensive units to start the battle with and use your own cards to build a deck. You have no control over the battle when someone attacks your build, only when you attack another build. The higher the level and HP of your castle the more silver income you get per day, and you also score silver by attacking players successfully. You can attack other cities up to 5 times a day and can purchase additional attacks for gold.

City Defense builds consisted of immovable 1.0 units and towers in the past, all with CDs of 9. Ever since 2016 (?), these were swapped with powerful godlike Tarots, Vice and Virtues, various Elites, and Specialists. However, when attacking other builds, quite a few players will still have their old builds from inactivity. Once you switch your build with the more recent Godlike cards, you will no longer have access to the old tower cards. Note that you can have Specialists from different classes in your build.

In addition to the introduction of the new defense build, attacking players can now immediately use all cards. When a player's turn starts, all cards in hand drop to zero cooldown, unless a card's CD increased by at least 2 (through Distraction).

- This means all skills and high CD creatures are now more versatile, and CD support cards are no longer needed.

- If a creature with 3 CD or more is feared on the defense's turn, you cannot summon it on your turn.

Build - Unlockable City Defense Units (you can only use one from each level) :

Finding an opponent costs 500 silver. You will be able to see the opponent's build (not their deck) and reward silver for defeating them before attacking. You can keep spending silver finding new opponents until you find a match and attack (similar to Clash of Clans). If you are defeated by the defense, you will still recieve a small percentage of the reward silver (twenty percent?).

The higher your Defense level, the higher level opponents you will meet with higher level health and stronger builds. Do not rush upgrading this! Also note that every time you upgrade a castle, you can attack 5 times again.

Adding Disinformation, Petrify, and Lightning Tempest to your defense deck is not advisable as the AI might use them on its own cards.

Elyse the Weaver is extremely effective on the older builds where all defensive build units cannot move.

In your defense deck, the total CD of all cards cannot be greater than 80.

Like PvP and bosses, you must finish your turn within 30 seconds.

If the immovable old non-wall defense units lose all basic abilities (Modesty, Blue Rabbit Ruru, etc.), they will be able to move. They are also able to be knocked back (Icy Gale, Knock Back, etc.).

If card drawing skills are used, CDs of all cards in hand drop to zero. This can be abused with high mastery skills.

Disinformation and Misinformation Campaign are highly recommended when attacking a battlement because they can permanently remove default defense units.

Retrieved from "https://rise-of-mythos.fandom.com/wiki/City_Defense?oldid=28517"
Community content is available under CC-BY-SA unless otherwise noted.