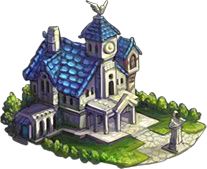 The Guild Hall becomes available at level 11. Players who are not currently in a guild may join or create a guild here. The fee to create a guild is 5,000 silver. The creator of a guild will become its guild leader.

You may apply to join an existing guild in the Guild Hall. You may send applications to as many guilds as you wish or they may send you an invite, but you may only be a member of one guild at a time. Once a guild has accepted your application or response, you will become a member.

Donating to a Guild

After you have joined a guild, you may donate to the guild by selecting the donate button at Guild Hall. Doing so will complete a daily quest and increase your guild’s wealth and experience as well as your personal contribution to the guild. Your guild’s leadership can spend the guild’s wealth to provide bonuses to its members such as decreased construction costs in the city and increased bonuses for completing activities with other guild members. So make sure to donate to your guild every day.

Each day there are several guild events that will happen throughout the day. Participating in Guild events will help to increase your guild’s experience, your contribution level to the guild, and guild ranking on the server.

You may research bonuses by using the CP you gain after donating to your guild or by competing guild quests. Research includes

Retrieved from "https://rise-of-mythos.fandom.com/wiki/Guild_Hall?oldid=26790"
Community content is available under CC-BY-SA unless otherwise noted.